Here's How to Get Your Cash1

The process is extremely fast. Apply over the phone or online.

Submit documents by 4 pm PST, get your cash the same day3.

Get money sent directly to your bank account, or pick up your money at a participating location.

Here's How to Get Your Cash1

The process is extremely fast. Apply over the phone or online.

Submit documents by 4 pm PST, get your cash the same day3.

Get money sent directly to your bank account, or pick up your money at a participating location. 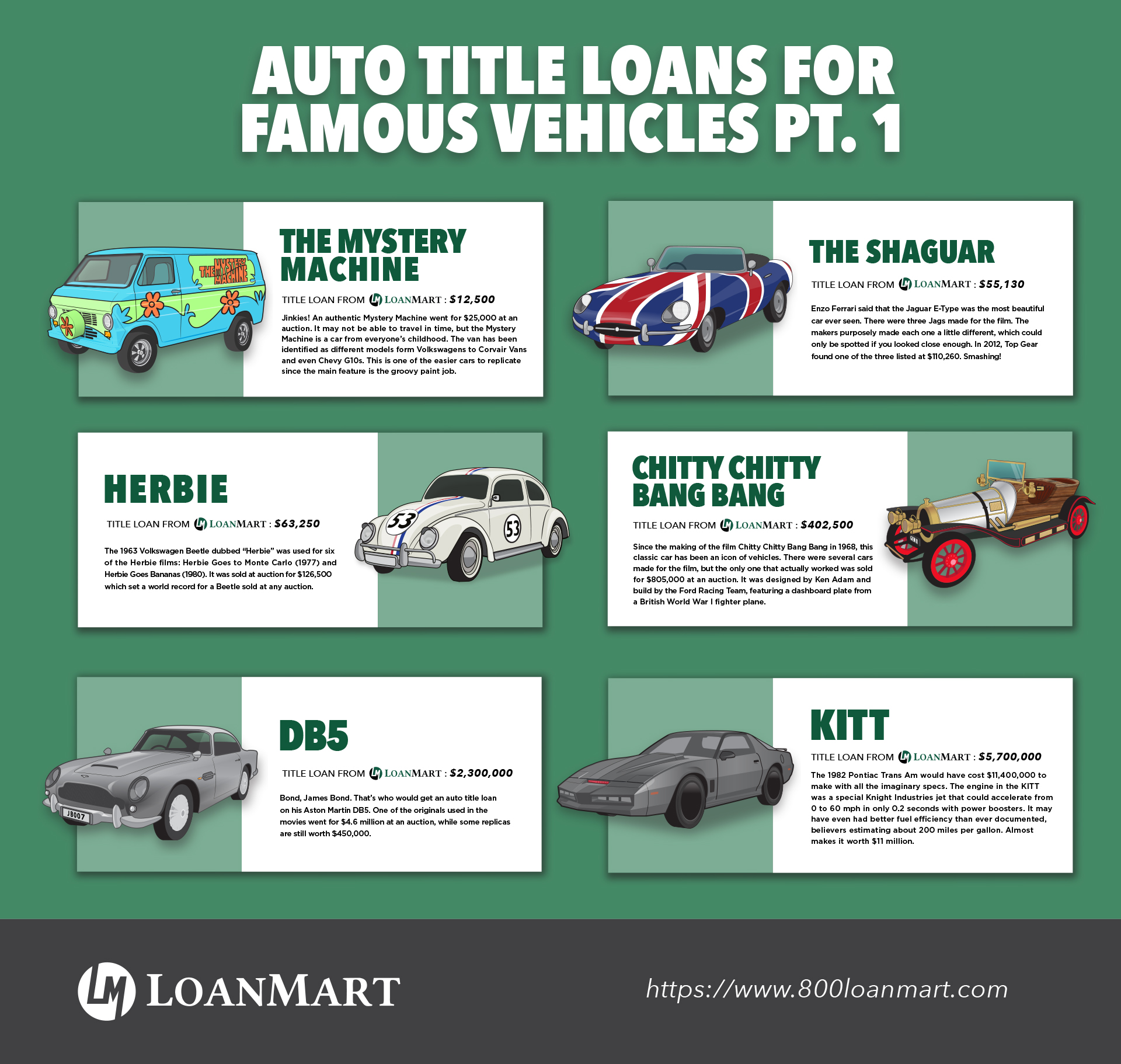 Take the first step and call our toll-free hotline to speak with a specialist.

The image shown features six of the most popular movie and television cars of all time, which one would you want to drive?
What kind of Car Title Loan would you get if you drove The Mystery Machine? What about James Bond’s Aston Martin DB5? It’s probably more than you would think!

When is the last time you spent 4.6 million dollars? If you are like me your answer is probably, “never … duh.” But, this isn’t the case for many classic movie and television fans. People who watched classic movies and T.V. shows like: Scooby-Doo, Herbie the Love Bug, James Bond in Goldfinger, and Chitty Chitty Bang Bang are very grown up now. I’m not saying they’re all old, I’m just saying they are probably at an age where every indulgent credit card purchase is accompanied with the thought, “meh, why not?”

Conveniently packed with anything and everything Fred, Daphne, Velma, Shaggy and Scooby need, the trusty Mystery Machine is always ready for more action and another mystery, just like the gang … most of the time.

Later owned by Fred, the Mystery Machine originally belonged to a family band called The Mystery Kids. The groovy paint job was by Flash Flannigan, the band’s pianist, (because bands apparently used actual pianos in the 70s) before he stormed off and quit like a true rock star.

Pretty much any van can become a real-life Mystery Machine, the cartoon version has been identified as everything from a Volkswagen to a Corvair Van to a Chevy G10. An authentic Mystery Machine sold for $25,000 at an auction.

I kid you not, the Oxford English Dictionary defines shagadelic, as “Sexy, esp. in a psychedelic or ‘retro’ way. Also as a general term of approval.” I don’t know what’s better, this word in an actual dictionary, or the hilariously accurate definition.

Appearing in the Austin Powers movies as a Jaguar E-Type with a simply shagadelic paint job, the Shaguar is definitely one of the pricier cars out there. In 2012, one of the cars used in the films was listed for $110, 260.

Although the car has no fancy features, it’s still absolutely smashing baby! Enzo Ferrari said that the Jaguar E-Type was the most beautiful car ever seen.

We all tried to forget the Lindsay Lohan remake from 2005, but nobody can forget The Love Bug that started it all. The Volkswagen Beetle was one of the first cars produced with families in mind, it was built to encourage vacations and traveling.

Designed by Adolf Hitler in his spare time from being a despicable person, the original name for the Volkswagen was the KdF-Wagen, or the Kraft durch Freude Wagen, meaning, the “strength through joy car,” … catchy. Later, the name was changed to the classic, Volkswagen, meaning, “the car of the people.”

While an original “Herbie,” was auctioned off for $126,500, and another for $66,000, there was a replica auctioned off for $23,100. Even though there were just about 100 “Herbies” made for filming, only four remain today. Most of the cars were either destroyed during stunts for the movies, or simply sold off and re-painted to live the rest of their lives as regular Volkswagens.

The classic movie loosely based on Ian Fleming’s 1964 novel, Chitty-Chitty-Bang-Bang: The Magical Car, is one of the most beloved musicals of all time. One of the actually functioning models made for the movie weighed 2 tons and was 17 feet long. The giant car was able to drive in sand, on cobbled streets, down a stair-case, and was seaworthy.

The license plate on the family flying car reads “GEN11.” The 1’s representing I’s so the plate is actually a code for “Genii,” referencing the cars magical abilities. Only one of the several cars made for the movie has the legally registered plate, “GEN11.” The car was sold for $805,000 at an auction.

Author of Chitty-Chitty-Bang-Bang, Ian Fleming, is also the creator of James Bond as well. … Can you imagine Agent 007 driving around in a sputtering car instead of his super sleek and smooth Aston Martin DB5? Me neither!

Bond’s car was the first movie vehicle equipped with gadgets, and the DB5 certainly set the bar high. Pimped out with revolving number plates, a GPS dashboard, (yup, that was a totally high-tech feature in the 60s) a rear bullet proof screen, front wing machine guns, ejector seats and much more, the DB5 was a car from the future. It is still an exciting car, even by today’s tech-savvy standards.

One of the original DB5’s used in the Bond film, Goldfinger, went for 4.6 million at an auction, but you can drive your own replica for anywhere from $400,000 to $1.2 million. You would be shopping for quality, not quantity with this one.

K.I.T.T., which stands for Knight Industries Two Thousand, was originally going to be called T.A.T.T., for Trans Am Two Thousand, in honor of the design based on the Pontiac Trans Am. But nobody wants to drive a car named T.A.T.T.

Being just a car with super capabilities, K.I.T.T., was supposed to have a robotic temperament and no personality. But the voice of K.I.T.T., William Daniels, (you might remember him as Mr. Feeney on Boy Meets World) refused to take part in the show unless he was able to develop K.I.T.T. as a rounded character.

With all of the imaginary features, K.I.T.T. would have cost about $11,400,000 to make in real-life. Some of the features, like the red lights showing the emotion K.I.T.T. wanted to express, were taken directly from the Cylons of the classic television series, Battlestar Galactica.

In the third season of the show, K.I.T.T. was destroyed and rebuilt with more imaginary technological features. This was because commercially available cars at the time were beginning to offer some of the same features K.I.T.T. had, so writers changed K.I.T.T. to keep her ahead of the times.

It is good to know, even if you don’t drive a car that has ejector seats or expresses emotion, there is a pretty good chance you can still get a Car Title Loan from LoanMart1. But that won’t stop me from wishing I had my own flying car.

LoanMart and the Rancho Cucamonga Quakes are proud to announce the winners of the 2021 scholarship. ...

Eating healthy can seem impossible, especially when you are on a tight budget. But with these 6 easy...

If you are living on your own, you know how difficult it can be to fix damages to your home when the...

Here are some details to keep in mind in order to save more money every month....

Emergency Cash to Pay for a Bail Bond

Need emergency loans for bail? See how a title loan serviced by LoanMart could be the financial solu...

Are Title Loans a Good Idea?

Title loans are a good idea for funding if you need quick emergency cash without the hassle of a long approval process.

Can I Refinance My Title Loan?

If you want better rates, lower payments, or longer terms, deciding to refinance your title loan could be the optimal solution!

The Best Place to Get a Car Title Loan

A big advantage of owning a car is that when you suddenly require a sizable amount of money, you can get a car title loan. The best place to get a title loan is with LoanMart!

How to Get a Car Title Loan

Yes! At LoanMart, it is possible to get your bill once a month for your car title loans. You can view the balance each month through your online account.

LoanMart and the Rancho Cucamonga Quakes are proud to announce the winners of the 2021 scholarship. Learn more about the winners and how you can apply to win $1,000 next year here!

How to Transfer a Car Title in Virginia

If you recently received or bought a car, it’s important to transfer the car title in Virginia. Once you have a car title in your name, you can inquire for an affordable title loan serviced by LoanMart!

All loans will be serviced by LoanMart. See State Disclosures for additional information. LoanMart is currently not lending in California and does not make loans or credit.